Instructions to ‘play in the OPEN AIR as much as possible’, to ‘always BREATHE through the NOSE and never through the mouth’ and to ‘WASH our hands before meals’ were just some of the slogans promoted by Japanese Red Cross posters to educate children in the 1920s.

These charming posters, on display from 17 October at New York’s Poster House, feature an array of instructional scenarios. In this poster, a young man in a smart military-style jacket and hat teaches a younger child not to ‘spit either on the FLOOR or in the STREET’. At their feet, fallen blossoms look suspiciously like someone has flouted this most basic of rules.

In another, designer K. Sakai uses a clever split-screen effect to demonstrate why we must ‘NOT read anything in DINGY PLACES’. In the top circle, a boy sits with good posture by a bright window, reading comfortably; beneath him, his fellow hunches over his magazine with his face barely inches from the page, attempting to read in darkness. It reminds me of the publicity produced to promote the new Finsbury Health Centre in London in the late 1930s, in which the old ‘dirty’, ‘dark’ and ‘dingy’ doctor’s surgery is transformed into the airy, spacious and gleaming modern health centre.

Writing about the Poster House exhibition, curator Angelina Lippert describes how the posters were used to teach children to be ‘polite, responsible and courteous member[s] of society’. Yet the use of slogans in both Japanese and English suggests that the posters had another purpose: as a form of soft power. As well as constructing better citizens in Japan, the posters could show the rest of the world how ‘civilised’ Japanese people were.

This idea of posters as a civilising force piqued my interest. It’s an idea I’ve encountered in my own research on British interwar posters, especially those produced for the London Underground, the Empire Marketing Board (EMB) and the General Post Office (GPO).

We could think of explicitly instructional posters, such as designs by Graham Sutherland, Vanessa Bell, Pat Keely, Lewitt-Him and Austin Cooper for the GPO’s ‘Post Early’ campaign.

At the Underground, designers such as Rosemary and Clifford Ellis, Gladys Mary Rees, Edward McKnight Kauffer, Barnett Freedman and Milner Gray produced posters encouraging travellers to shop at off-peak times of day or at particular times in the month. These posters aimed to shape citizen behaviour, leading to a more efficient service for all.

Less obvious is the extent to which interwar posters attempted to ‘civilise’ the public through their use of modern (often modernist) art and design. Leading interwar patrons such as Frank Pick (London Underground), Sir Stephen Tallents (EMB, GPO), Sir William Crawford (EMB), Kenneth Clark (GPO) and Jack Beddington (GPO, Shell) believed that good design could improve public taste. Featuring contemporary art and design in promotional materials bought prestige to their organisations, yes, but they also educated the public about the latest developments in modern art and design.

Two striking examples produced for the GPO are John Farleigh’s daring Vorticist-inflected ‘Underground cable’ (1935) and Abram Games’s ingenious ‘Send Your Good Wishes by Greetings Telegram’ (1937), in which telegraph lines become a hand which reaches out to farflung friends and relations.

We could think also of Margaret Calkin James’s work for London Underground (‘Trooping the Colour’, ‘Royal Tournament; Olympia’, ‘Bluebell Time in Kew Gardens’ and ‘Q.E.D.’), all of which use geometric abstraction and rhythmic repetition to create a series of clever and intriguing posters.

These are wonderful posters. But exactly what these patrons hoped to achieve by commissioning modernist artists and designers is unclear. Why was it important for ordinary people to be educated about modern art and design? There was a widespread belief that increased access to modern art and design was a good thing, but few reasons were given why such access would be beneficial. Implicit was the assumption that if a person’s taste was improved, then other improvements would follow. As a Commercial Art & Industry article from 1932 put it,

if we recognise the enormous power of the Poster over the people, we must recognise also that the Poster must be properly used—to educate the people, to improve their minds, to clear their outlook, and to bring to them a realisation of all the great and manifold, cheap and easily obtainable comforts of our civilisation.[1]

During this period, we can see both commentators and patrons grappling with what the poster could do. There’s an emerging awareness that well-designed posters could not only inform the public but also change the way they thought and acted. The organisations I’m researching wanted to change both the world for the better, but attempting to ‘improve’ the public is still a form of control. Frank Pick said in 1916 that the ‘ideal advertisement was ‘not of a fancy or patent commodity but of right living and right doing.’[2] But who got to decide which types of ‘living’ and ‘doing’ were ‘right’?

Exploring these peacetime posters, both those produced by the Japan Red Cross Society and British state-funded organisations, raises questions about the fine line between publicity and propaganda, ones perhaps more usually associated with times of war.

Posters of the Japan Red Cross Society are on show at New York’s Poster House from October 17, 2019 to February 11, 2020. Thanks to Angelina Lippert at Poster House for permission to use images from the exhibition.

2 thoughts on “Posters as a civilising force” 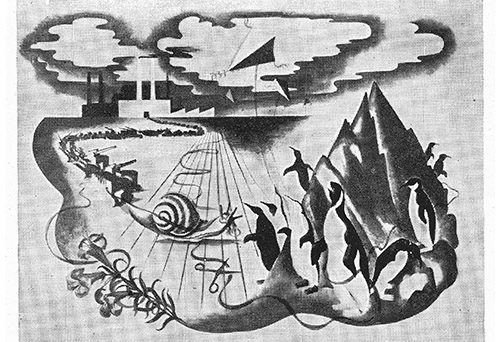